I hadn’t realised just how far out of the city centre North Shields was. I reckon it was a good twenty minutes ride and a potential flashing incident on the excellent light railway system. Something Leeds should have implemented 40 years ago. The light railway system that is, Jimmy Savile is and always has been, one of our own.

Lets examine the flashing incident first. The two lasses who’d stepped straight out of the pages of Viz were convinced. Me? Not sure, it could have just been a malfunction in the old gadge’s belt and trouser department?

Actually, once everything was stowed and secured back in place he spoke and asked us if we knew where we were going. It was only then I realised that, had he been unfortunate enough to live alone, it could have been my old man, struggling with shopping and fingers who’d lost most of their use years ago.

I’d received many suggestions for an after Woodfest2018 visit, but I was guided by our friends who’d visited more recently. The last time I was in the toon was around 1987, a pub in a railway carriage in Jesmond and a well known local lad made good featured. If I cryptically said he probably got hammered, you might work it out?

Now obviously I didn’t go round east Newcastle shouting Byker GROVE! It didn’t feel the thing to do when we alighted the Metro and it definitely didn’t feel the right thing to do as we wandered through the Banlieue. In fact eyes down, gob shut felt about right, apart from the odd glances from Mrs C and the occasional, ‘Are you sure you know where you’re going?’ 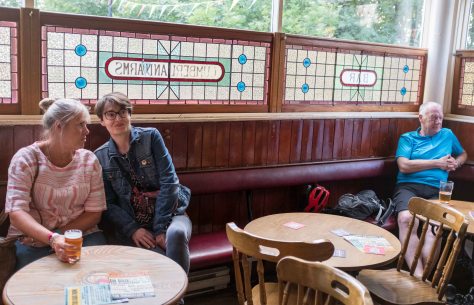 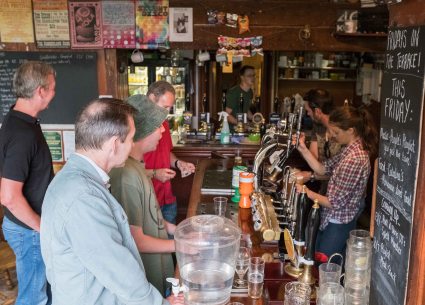 Turns out our friends have been to The Cumberland Arms before, for an overnighter no less (highly recommended apparently). I was quite surprised when it loomed into view, the numbers of families on the grass at the side and the paved area in front suggesting some sort of gala? Bunting, balloons along with barbecues appeared to be mandatory, and if you hadn’t brought your own food a street vendor would oblige.

Apparently The Cumberland Arms was an end of terrace house before it was turned into a pub. Sadly the pub is all that is left. If you half close your eyes you can semi visualise what it might have looked like. It looked very incongruous to my eyes though, a vignette of yesteryear in the midst of anonymous inner city deprivation; a portent of hope.

As soon as I walked in the massed ranks of Good Beer Guides told a story. Their pages telling me The Cumberland Arms was rebuilt 100 years ago, and I don’t reckon they’ve cleaned it since then neither. Don’t get me wrong, it wasn’t mucky, just a little dusty and worn around the edges, a bit shabby chic if you like. The gents were however, a first rate blend of original features, the latest fittings and cleanliness, which got top marks.

The clientele were a mixed bag, all ages, from all stations in society, although I don’t think they would necessarily see it that way. Think cosmopolitan, bohemian and not a lot of geordie accents like. I’m sure there were some pukka Tynesiders amongst them, but the majority seemed to be from the ranks of, ‘went to Uni in Newcastle, lived somewhere nearby and still live here types’.

Don’t get me wrong, they were a lovely bunch and there was a real nice vibe going on, mainly outside, as opposed to inside in one of the two rooms. We went straight into what is best termed the main bar and the home of eight cask and four keg ales, although there were more beer engines available.

I remember drinking Roosters Jubilee at £3.60 a pint and my book says NBSS 4. The Almasty Session Pale was a bit dearer at £3.90 but the book still says NBSS 4, and was similarly delicious. I think I had something else, the beer was that nice, but I never wrote it down and we stayed, at my insistence, a couple of pints longer than intended.

There was strong evidence of a musical theme, dominated by folk music and quite a few ‘anything but Irish music sessions’. I reckon it would be a good winter pub with the stove roaring and the Northumbrian pipes droning away, or just sat there playing board games or cards. Which prompts the question, do people still play cards in pubs these days?

All too soon it was time for something to eat and another trek through the banlieue. All I will say is keep trekking, it’s worth it, the natives are friendly, the pub is brilliant and the beer is spot on.

Only surprise was when we left, everyone outside had gone, the kids, the food vendors, the barbecue, the lot. Maybe they’d gone for their tea as well?