For a little pub in the middle of nowhere, the sizeable car park was exceptionally busy, even for Saturday lunch time. Walking into the warm glow of the bar, there was hardly a spare place to sit. Looking round there was something strange going on? It wasn’t the middle aged lady sat by the roaring fire, wafting herself with her oriental fan? Nor the smattering of serious beer tickers, hikers, or thrirtysomething couples discussing the merits of their beer, neither. No. It was the presence of third pint tasters on virtually every table. I’ve never seen as many taster flights in a pub anywhere, especially a traditional village boozer, unbelievable!

The brewery tour was one of the best tours I’ve ever been on. Up there with the visit to Theakston’s old brewery in Masham, circa 1987, led by a wonderful old gentleman that’d worked there man and boy who regaled us with tales that will have been long forgotten.

Our guide at The Great Yorkshire Brewery, Janet, was pleasant, passionate, enthusiastic, engaging, entertaining and very knowledgeable. Apparently she’s been home brewing since she was seventeen, and it showed. Even someone with zero knowledge would have ended the tour knowing how to start full grain brewing, and the science behind it.

She even gave an explanation of the term FUBAR which was chalked on a board in front of one of the fermenting tanks. No, they hadn’t nicked the name from Tiny Rebel! Apparently they’d been brewing it all summer for them, something that Retired Martin noticed when he visited the brewery. Disappointingly, when I contacted Tiny Rebel, they said they’d just been doing a trial brew, as the kit at Cropton was the same as that being installed in their new brewery. In reality, I reckon, with the success of Cwtch, they couldn’t cope down in Cardiff until the new brewery was completed (I believe it is now and the date of this visit was November 2016). I like the beers Tiny Rebel are making and I understand neccessity, but I do like to get a right tale.

Contract brewing is one of the strengths of The Great Yorkshire Brewery. As well as exporting their beer to Japan and Dubai, they brew for Madness, Tony Hadley, and Two Chefs. N.B. not the Dutch brewer, these are two Yorkshire chefs from the Star at Harome. Oh, and Tiny Rebel obviously.

Janet’s anecdote about Graham McPherson was a cracker. She reckoned she was five years younger than Suggs when Madness first hit the charts, yet when he came up to Cropton to have a go at brewing she thought he looked twenty years younger than she did! I reckon we all think a bit like that these days.

The brewery tours start at 11am and 2pm, Tuesday to Saturday, with an evening tour on Tuesdays as well. Ideally, if you’re staying over, as we did, you’d want to do the brewery tour first, check into your room and then go out for the afternoon to somewhere like Hutton le Hole, Rosedale Abbey, Thornton le Dale or Pickering. Owing to inclement weather, we decided to sit tight and drink our free pint, included in the price, which at £7.50 was pretty decent value.

A taste off between Madness Absolutely (4.2%) on cask and keg was conducted. Both excellent and a nice easy drinking pale beer. On balance, the keg just shaded it. Conversely the Madness London Porter went the other way. Over the afternoon/evening we tried most of the beers on the bar; eight keg and six cask. Stand out was the keg Red Lager (5%), a hybrid lager ale with all sorts of red berries and tropical things. The Chocolate Orange (6%) on cask was nice if you like a sort of dark ruby, bitter orange, chocolate, vanilla type of thing. It just felt a bit too sweet and cloying for my taste. 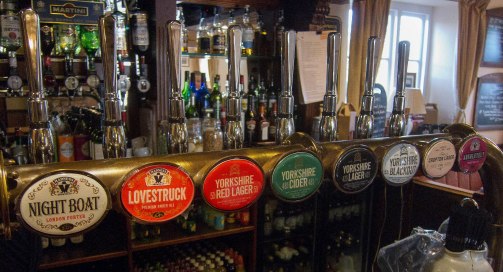 The Monkmans Slaughter (6%) was a nice touch. A classic, darker, stronger bitter beer in style with a nice reference to Mr Slaughter who originally founded the brewery. The original brewery started in the pub in 1984, moving into the bespoke brewery premises at the rear in 1994 and becoming rebranded as The Great Yorkshire Brewery in 2012.

You could be forgiven for thinking that the pub is solely a beer tickers destination venue, which is not the case. Shortly before evening fell, a shooting party descended on the bar. All gaiters, plus fours and tweeds mixed up with gamekeeper types, dog handlers and beaters. This might instantly turn some people off. However, they were all decent Yorkshire folk and whether you like it or not, if people didn’t shoot Pheasants then we’d not see many in our countryside. This did, however, put a stop to our afternoon drinking session as one could no longer get to the bar. Later on there were quite a few locals in for their Saturday night pints, which was nice to see.

The evening meal was quite excellent in every way. Quality food at decent prices. The only downside for me was the fire had gone out in the bar (there is a separate cosy restaurant). I could write a thesis on pub fires; they need to be roaring at opening time, dwindling when busy and still just be going at closing. The lost art of keeping a pub fire going just right, that’s a good book title if ever I heard one; they need to read it.

I don’t think the evening entertainment was planned, it just sort of spontaneously flowed from the mouths of the overnight residents and local customers. Far too much anthropomorphising over small dogs and overweight retired Greyhounds. Someone didn’t like Poldark at all and much preferred programmes like X-Factor and Britain’s (not) got Talent. They just couldn’t understand why Gareth Gates couldn’t hack it on Strictly? Psst, it’s not real you know? The highlight was the proud parents proclaiming their son had been on Educating Yorkshire. Now I’ve seen a few trailers for this and it’s not something you’d crow about if your kid was on it. Especially not if he was one of the teachers at some failing sink estate school!

The bar and restaurant staff were accommodating and friendly, as were the two brewers David and Darren who popped in for a couple of pints of their well made beers. I enjoyed chatting with them and it turns out Janet the tour guide is de facto Mother in law to one of them. I can’t remember which one now … it was a long day.

We stumbled upstairs long before last orders were called, decent room,  comfortable, well furnished and there was no way you would ever have forgotten to leave the key when you left. I’m not joking when I tell you the fob was fashioned from at least two pounds of mild steel; you wouldn’t have wanted a crack on the head with it!

The next highlight was the breakfast. It’s very easy to make a full Yorkshire breakfast, but so many people just don’t quite pull it off. The secret is quality ingredients, well cooked and plenty of it. Forget your see through rashers, the New Inn bacon was thick and tasty. The Bell End Farm sausages, I kid you not, were unbelievable, although I reckon I could market them better? My only criticism, and it’s one I would point at many chefs, is the modern way of presenting the grilled (griddled actually) tomatoes. They really need a lot more cooking for me, a bit of caramelisation on the outside and squidgyness inside. Yes, I know they’re then a bugger to get off the griddle and nicely onto the plate, but it’s worth it, please.

We went on one of those Red Letter day packages (tour, evening meal and B & B), but I reckon you could stay over and have a decent evening meal and breakfast for about £120 for two, depending how many courses you decide to eat. B & B is £85 per couple which I thought was decent value for what we got.

Anyone who has never been to this part of Gods County needs to investigate the Ryedale and North Yorkshire Moors area. Aside from the varied, yet stunning countryside, seaside, stately homes, market towns and beautiful villages, all within 20 miles of Cropton, there’s also some beery gems in Malton (Brass Castle Tap House) and Scarbro’ (North Riding pub and Brewing). I’ve already got my eye on a return trip for the summer, it’s only £5 per person a night to camp on the breweries small campsite!

Verdict: Destination pub on the edge of North Yorkshire moors, would suit beer enthusiasts, walkers or couples looking for a quality weekend break that’s a bit different. A must to pop into for a pint if you’re ever anywhere near.