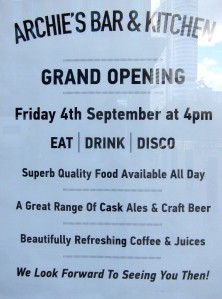 Granary Wharf is a really cool part of Leeds and there are some of my current favourite pubs in Holbeck. I saw this poster yesterday, in a window down there. My first thoughts were; bucking the trend, new bars opening here, not closing like everywhere else.

So, can the scene in this part of Leeds, stand another bar? Of course it can, situated in the railway arch previously occupied by the old Wasabi Teppan – Yaki restaurant, nestled between The Hop and Candlebar. The question is, can this little Venice stand another Ossett Brewery outlet? When it opens there will be three Ossett premises within 75 yards of each other. I get it that with the opening of the Southern entrance to the city station that this previously neglected part of town is going to boom, but three premises all within throwing distance of one another.

Fair enough, The Hop is a traditional sort of bar/boozer, pies and pints and I quite like it in a troglodytic sort of way. Similarly Candlebar has it’s own identity, craft beer, light meals and none of Ossett excellent cask ales. Archie’s, from what I can glean appears to be a collision between the two, craft beers and real ales. The USP appears to be, ‘a mix of eat in and take out dining options’. Maybe the ale is ancillary here and it’s the metropolitan type food consumers they are attracting? Ossett must be fairly sure because they have put £350K into the venture which brings their total investment into Granary Wharf to around a million quid. The brewery told YEP that it is a ‘Chameleon bar’, catering for breakfast, lunch and dinner, then morphing from that into a Friday and Saturday night venue. There certainly appears to be lots of gimmicky features like a VW Camper van counter, funfair mirrors and a sailing boat! Strangely, I could find no mention of Archie’s on the Ossett Brewery website, which is a bit suspicious from a company that seems to have more outward facing heads than the Hydra; each with a different name.

I’m looking forward to seeing it open and I wish Ossett every success. Privately, I wonder wether they are not being guilty of putting all their eggs in one canal basin. I will pass judgement in due course, but in term of the branding and the beer, I predict some Loiner composing a one liner about the beer and the canal.