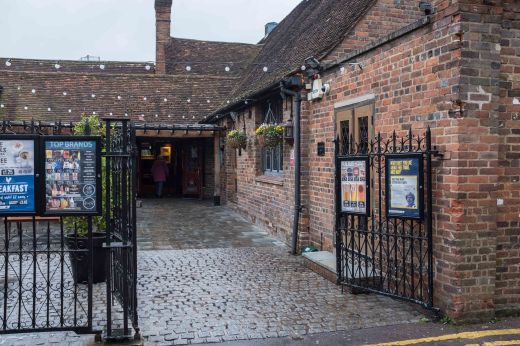 Is this the best Wetherspoons ever? Out of all the ones I’ve visited it’s my favourite to date, and up there with the Hamilton Hall on Bishopsgate, EC2. Although how do you compare two original sixteenth and seventeenth century barns with a restored Victorian ballroom?

The story goes something like; the larger barn containing the bar area is the younger of the two dating from the seventeenth century and was moved from Waterend Estate in nearby Wheathampstead to it’s present location in the 1930’s. The smaller barn dates from the sixteenth century and was moved from Little Hormead to partner the larger barn in the 1960’s.

Whilst at their current location the barns were used as a restaurant run by local company Thrales and in their heyday there was a dance every Thursday night. Wetherspoons acquired the site 2004 and re-opened them in February 2005 after restoration.

Anyone doubting the integrity or the merits of Tim Martin’s company really should come here and see what they’ve done. It’s absolutely wonderful, a bit like being in a museum. You know the kind, where you’re immersed into the past and become part of it. 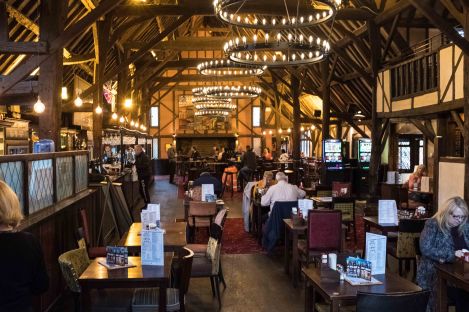 Only thing is, I’ve never been in museum where there’s two well dressed senior citizens, complete with overnight bags, eating breakfast over a bottle of Prosecco. We thought it a certain tryst, I mean, you don’t talk to each other like that at their age, do you?

But what a place for a liaison. Massive chandeliers hanging the full length of a space with more beams than all the pubs in St Albans, nay Hertfordshire, put together. There’s a wonderful light in the main barn, subdued, cosy, you expect to see smoke swirling around the rafters when you look up. A small minstrels gallery offers spectacular vistas across the hall. You can sit up there too, I just bet the staff aren’t too keen to lug your food up the steep steps.

Fireplaces, massive ones, blazing away at both ends of the main hall. Stained glass and classy original art work. Oh and two different carpets. This place is unbelievable. You’d hardly believe you were in the much maligned chain purveyor of cheap eats and VFM booze. And I’ll tell you what, I love it. It’s fantastic.

The smaller and older barn to the left of the entrance is lighter and airier, more sedate, a little bit smarter, almost reminiscent of a smart hotel with it’s pale pastel carpet. The gentlefolk in here concentrating on tea, coffee and food. Presumably the 1030am drinkers thinking it too far to traipse to and fro the bar in the drinking hall.

The National Trust have nothing on this place, English Heritage neither. Tim doesn’t charge a tenner to get in and they don’t serve ale and food, and they’ve carved up most of the heritage sites between them so you have to be a member of each club. Long live Tim Martin, he’s a national treasure, preserving bits of our heritage that would have otherwise disappeared whilst serving a vital function to the community.

There’s a very comfortable Blenheim Room, celebrating the fact the missus of the original Duke of Marlborough originally came from Waterend House. Unfortunately it was roped off when we visited and you couldn’t go in. Well, you wouldn’t want some piss stained alky sitting on the nice chairs would you?

Mind you, one climbed over the cordon between entrance foyer and his favourite chair, to the amusement of the bloke decorating the room, and everyone else too –  You can’t sit there mate I’m painting in here.

I’m still not sure why some ‘spoons do a better breakfast than others? Surely they buy centrally? Anyway, this one was brilliant, well cooked, well presented and they got the tomatoes just right, and they were really nice tasty tomatoes – maybe they source stuff like this locally?

I didn’t have a beer. I only went for breakfast. If I had, I would have chosen Adnams Old Ale. Not often you see it, I’m quite partial to it and a half would have gone well with a cooked brekkie. As well as the unholy trinity they had six additional cask ales, including three Locales; I’m counting Bedfordshire as being as near as dammit. Hopefully they are getting through them quickly as opposed to sensibly reducing the range, like many Wetherspoons seem to be doing at the minute?