Would St Albanians be disappointed if I said Ye Olde Fighting Cocks was like Olde Englande meets Disco pub; because that’s what it felt like. That’s not to say I didn’t enjoy it, the real fires were particularly welcoming. And isn’t there just something about a real fire that is at the very heart of an English Inn.

I’ve lost count of the number of times I’ve heard people comment on a pub fire as soon as they walk in on a chilly winters eve, almost as if they’ve never seen one before. Maybe a lot of folk haven’t, I remember one of my son’s mates visiting and asking how you turned the fire off? It’ll always be a real fire for me, like my Grandad said when they fitted him a gas fire, ‘It’s alreyt lad, but tha can’t spit on it.’ 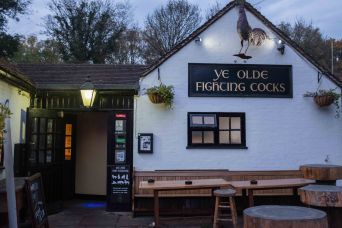 The walk from the Six bells through a pleasant park, alongside the trickle that is the Verr was memorable. There’s something about twilight time and water that’s just magical and a straight fit with a real fire.

Ye Olde Fighting Cocks is one of er … depending on who you listen to, roughly eight pubs vying for the title of Oldest Inn in England. To be fair to them they have a newspaper article on the wall describing the main contenders.

My heart would say it’s got to be the Bingley Arms, just down the road from me, at Bardsey. If asked, I would say prove it, something that may be evidentially problematical with many of the pubs claims. Whatever, the Fighting Cock is pretty old and I believe the existing building, a former pigeon cote, dates back to the eleventh century.

Seven cask ales on, I went for Oakham Citra as a safe bet, decent enough NBSS 3- , roughly commensurate with it’s GBG standing. I’m not sure why none of the others didn’t tempt me; Rudgate – coals to Newcastle, Black Sheep – ditto, Farr Brew (2) a Locale and the one I really should have gone for, plus a Cotleigh brew and one from Purity.

For a big pub it was pretty quiet for a Monday tea time, even though they do food, something conspicuously absent from the Proper Day Out agenda. I quite liked the comment at the end of the menu … and our nuts contain nuts.

Sort of got me thinking when did people start to get nut allergies and why? No one at our school was allergic to nuts and the 2,000 odd pupils ate and threw peanuts at each other at will. Whereas, on a flight a couple of years back there was a kiddie on board with a nut allergy, and even mention of nuts was prohibited. Trust me to have taken a bag of cashews as my in-flight snack.

Although I enjoyed Ye Olde Fighting Cocks, something just quite wasn’t right, and like Oliver Cromwell, I would only have stayed one night, or hoped the fabled tunnels led back to The Mermaid.