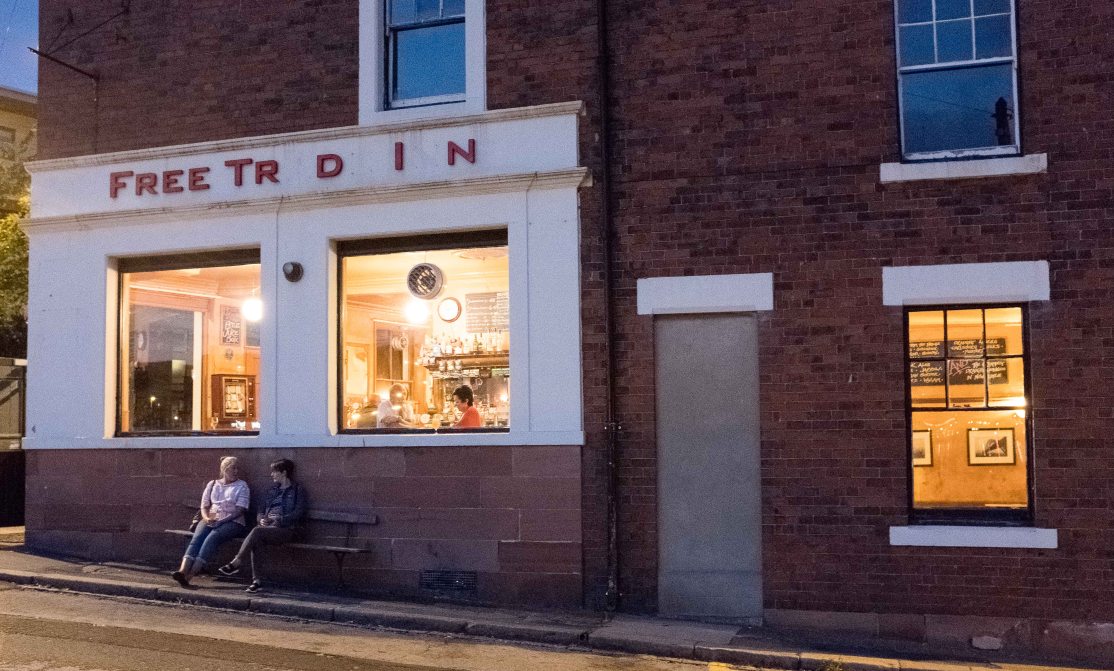 Last night when I told you all that stuff

About the way things are

You didn’t understand a word

But you said you did …

After the Cumberland Arms, our ‘not sure four fiftysomethings ought to be wandering round here at this time of night’ walk led us to the most amazing Lebanese restaurant. The Bake is definitely the place to go in Byker for humungously large portions of wonderful shawarma, flat bread and fūl medames, at amazingly low prices. The 750ml bottle of beer won on the Woodfest2018 tombola came in handy too, there’s no licence, but the friendly and professional staff are more than happy to supply glasses if you BYO.

Anyway, by the time I’d rolled down the hill into The Free Trade any notions of another pint were merely whimsical fantasy. No worries, strong keg beer comes to the rescue in the form of Bone Machine Brewery Garden of Death. Okay some Good Beer Guide tickers would seriously berate me here and not allow this as a bona fide tick on the grounds I never drank any real ale.

Well fuck all that I say. I’ve been and I’ve seen it, and it counts and the pale murky Bone machine Brewery beer was very good and precisely hit the spot. In fact it proved and added to my ‘theoretical model of pubbiness’ which I’ve been working on since I met Katie and Simon, and discussions around this changed ‘Beer’ to ‘Right drink’ and the invocation of mood and feeling as an outcome that impacts on the pyramid.

Apologies for getting a bit technical, it really needs some detailed explanation, which might be forthcoming in a talk entitled, ‘My trip to finalise my top ten pubs’, I’m giving at Calderdale and Halifax Beer Festival on 29th September.

Getting back on track, we took our drinks outside where the ladies sat on the same bench where thousands of bored kids will have sat with a bottle of pop and a packet of crisps while their old man got rid of his wages inside. Me? I went and had a poke around in the little beer garden across the road. 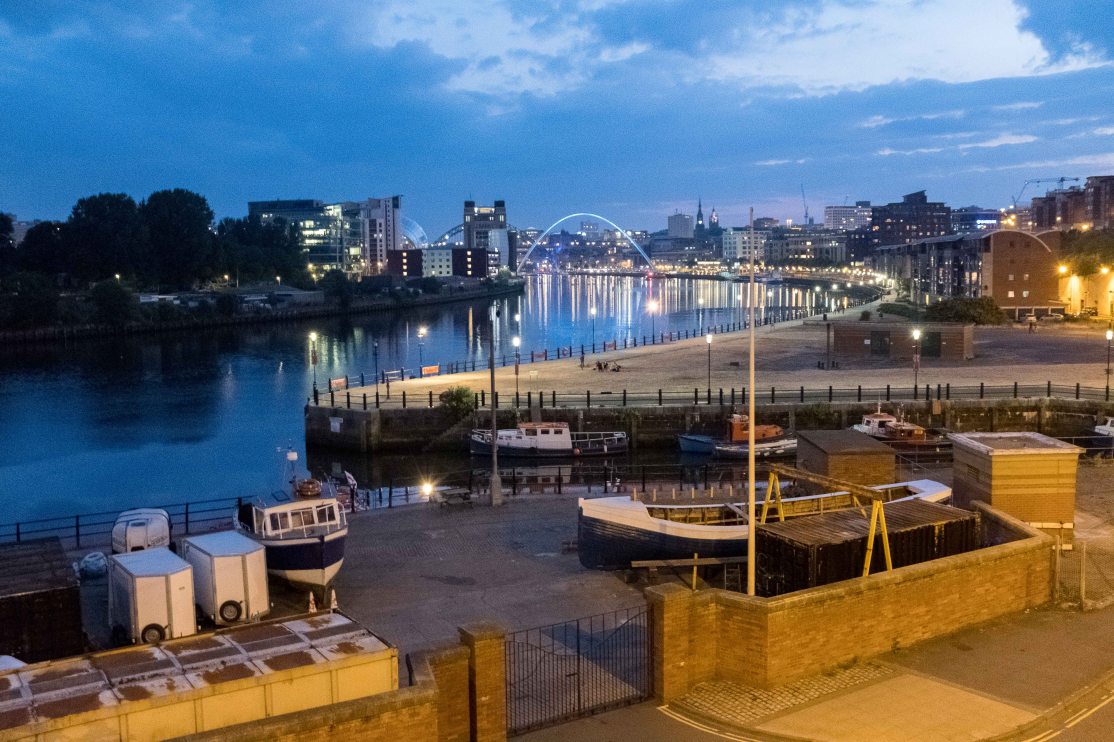 I haven’t been in many beer gardens in Newcastle, but I reckon, even if I had, this one has still got to be one of the finest. The nightscape of the Tyne and it’s illuminated bridges was superb. Folk pay fortunes to cross the world to admire views like this. They needn’t bother, because where in the world could they enjoy such a view from the windows of an unspoiled corner of the street boozer with a pint of  … Er, I’m not sure which real ales they had on, nor how many. The GBG tickers bible says up to nine, plus two real ciders, my notes say diddly squat.

My photos weren’t much better, and in the three way battle betwixt man, camera and beer, the latter two have come out on top. I somehow managed to reasonably (for web) handhold the river scene at 1/10th second though. You can make out from ‘the best of the mediocrity’ that the sort of L shaped one room pub is reasonably original. Although I suspect it wasn’t originally one room and the area to the right of the bar where you go down some steps feels like at sometime someone’s knocked through into the adjoining property. 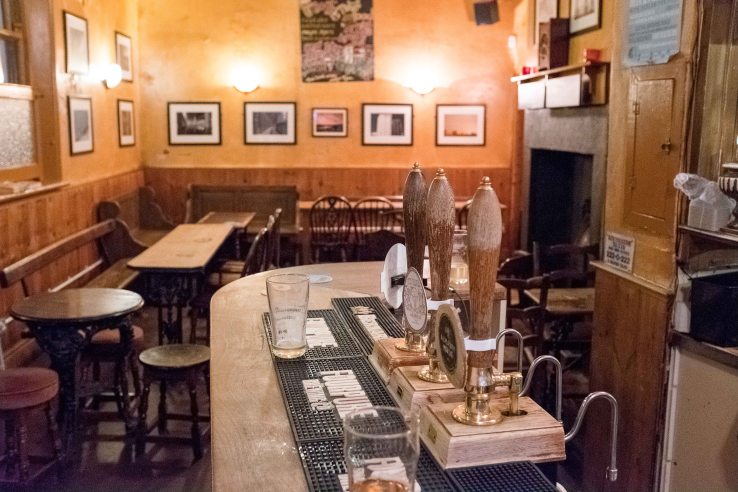 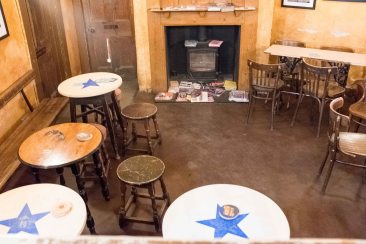 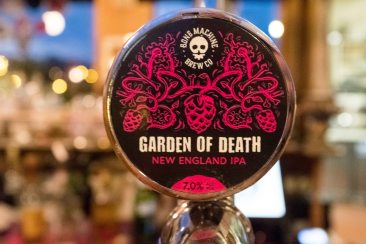 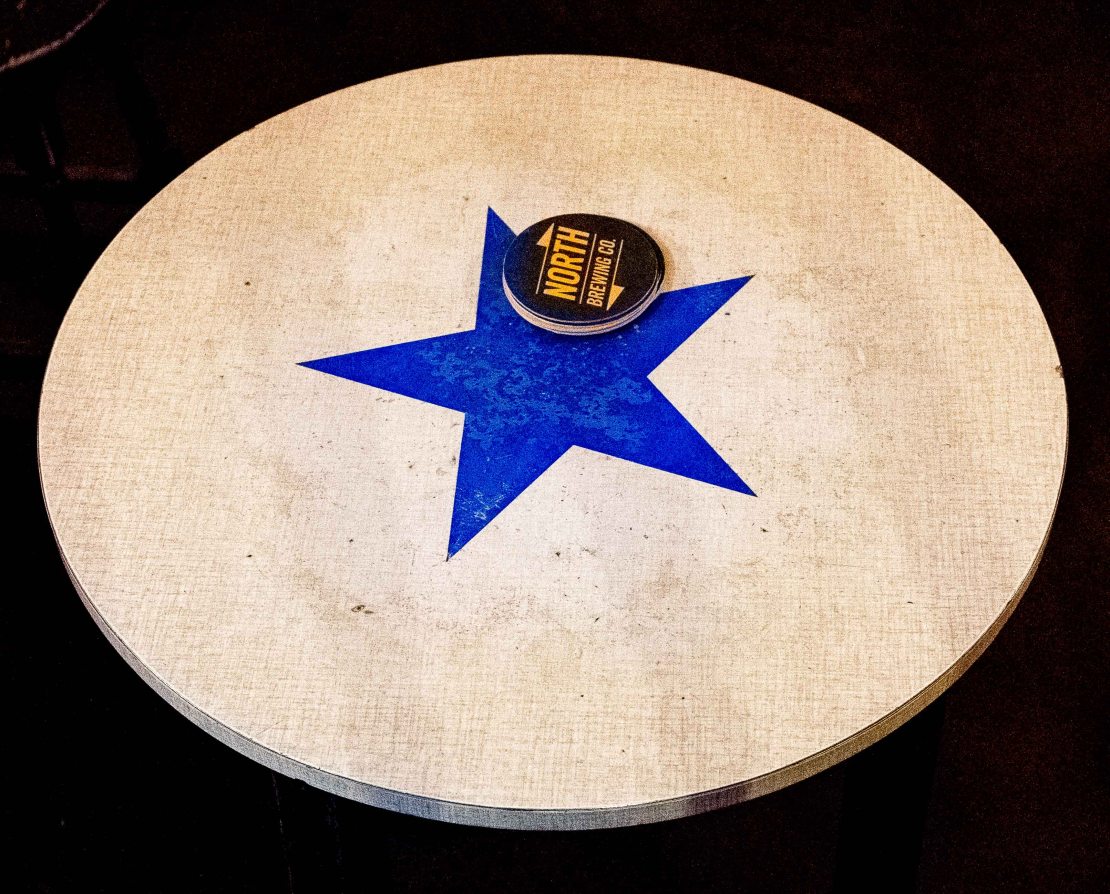 One of the highlights for me, and a give away to the pubs heritage is the Scottish & Newcastle Breweries blue star logos on the tables. They’re probably nowt special in the cold light of the day, but at half ten at night when you’ve been out since noon, they seemed quite impressive.

The only other stand out was the very high staff to customer ratio. Indeed, with everything I’d heard about Newcastle, I was surprised how quiet it was. Obviously we had stayed out of the wrong parts. Mind you, when we walked in, there was no one else in the pub. Okay, a few wandered in after us, but this part of town remained very quiet, even on our pleasant walk along the promenade back up to, and over, the blinking eye bridge. 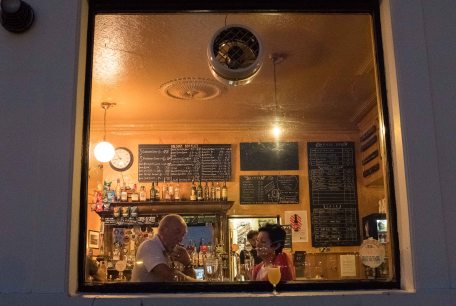 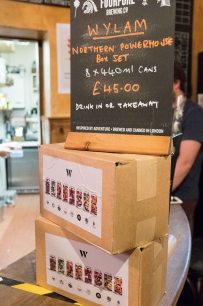 For some reason I captured the cases of Wylam’s Northern Powerhouse Brew Series OTB. An amazing selection of collaborations between my favourite brewery and several other of my favourite breweries. It doesn’t really get better. Is that why I took the picture? Or was it to shock the unbelievers with a box of eight cans at £5 and a bit each? Or had I got it in my mind that the only way they sell first day covers and mass produced mint coin collections is by somehow convincing the many thousands of buyers that they are limited editions which only a select few can obtain?

Apologies to any of the good folk who had their windows open in the waterfront apartments on the Tyne Quayside one Friday night in early July and heard some idiot doing a Pauline Black impersonation.