I’ll sum Woodfest 2018 up in a sentence: A superb festival that is an excellent celebration of the place where the Brewers art meets that of the Cooper.

To be fair, it’s not often I blog about the same festival twice. Strictly speaking, it’s not actually the same festival, the 1st Annual Woodfest was held in at ‘the home of beers from the wood’ in Castleford and was awesome. But, that’s as far as the comparison goes  because this years 2nd annual Woodfest (2018) was held at the Exchange and was equally awesome, just in different surroundings. 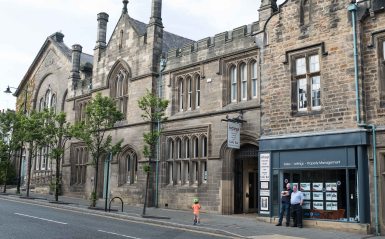 The Exchange cultural arts venue is a magnificent old stone building that was once North Shields courthouse and police station. The festival bars took over the main auditorium, which at times looked quite sparsely populated. That’s because most of the people gravitated to the adjacent Café bar and pleasant courtyard where you could sit and drink, or even get a wood fired pizza from the Greek Kitchen, who’s chef looked to be of Indian heritage, yet made authentically Italian pizzas; excellent and real VFM too. The Café bar looked worth a visit at any time for a decent selection of well kept real ales and home cooked foods. 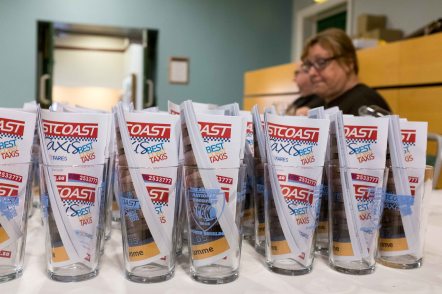 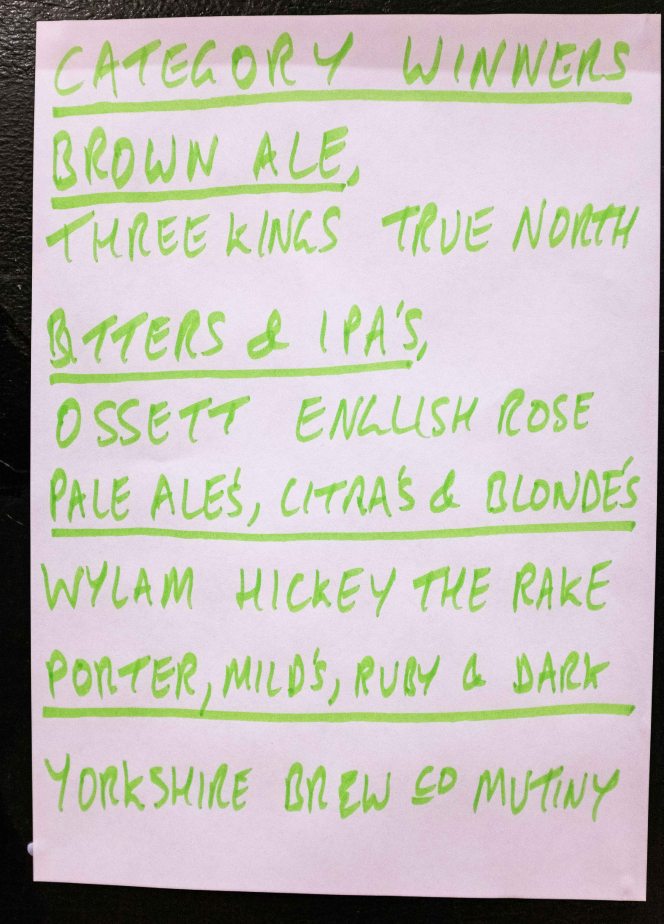 It cost a tenner to get in, including a festival glass, program and two beer tokens. The keen and eager, like ourselves, who had booked tickets, travel and hotel three months before, got three tokens for enthusiasm.

My first little niggle, and I heard it from people last year, was the cost. In fact many of the people on a motor coach tour organised by my local branch of SPBW didn’t actually visit the festival, I’m told, and just visited pubs in the general area. Hang your heads in shame I say. Nay, resign if that’s how you feel, when people have gone to so much trouble to organise a top level event like this. In any case, there was half of the West Riding in the festival on the Friday morning when I went.

I thought the prices were exceptionally reasonable, £3.40 a pint for the majority of beers and £5.10 for the higher ABV/more esoteric ones. Effectively £1.70 a half on one bar and £1.70 a third on the stronger beer bar. Buying your beer was easy too, after the initial entry, you bought as many or as few of the plastic tokens as you wanted.

There were seventy odd beers on offer, all pulled from cooled wooden casks. A high proportion were darker beers which very much suit wooden casks, Elland Brewery’s 1872 Porter, very much proving this and one I had to have, even though I’ve drank it many times before. 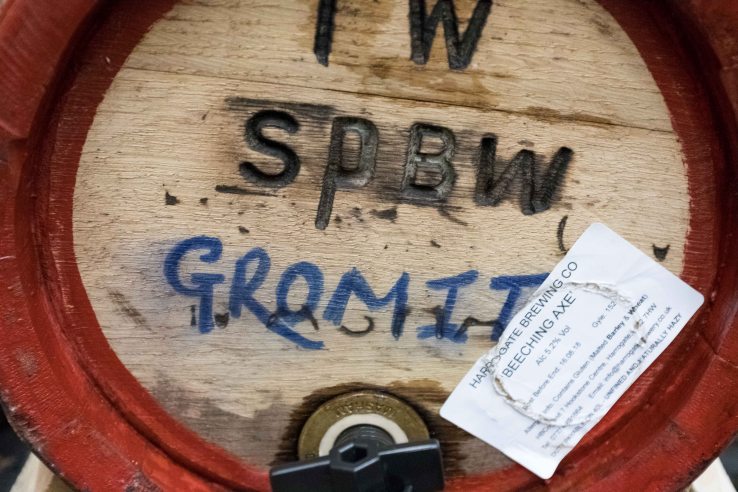 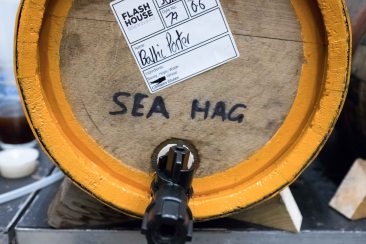 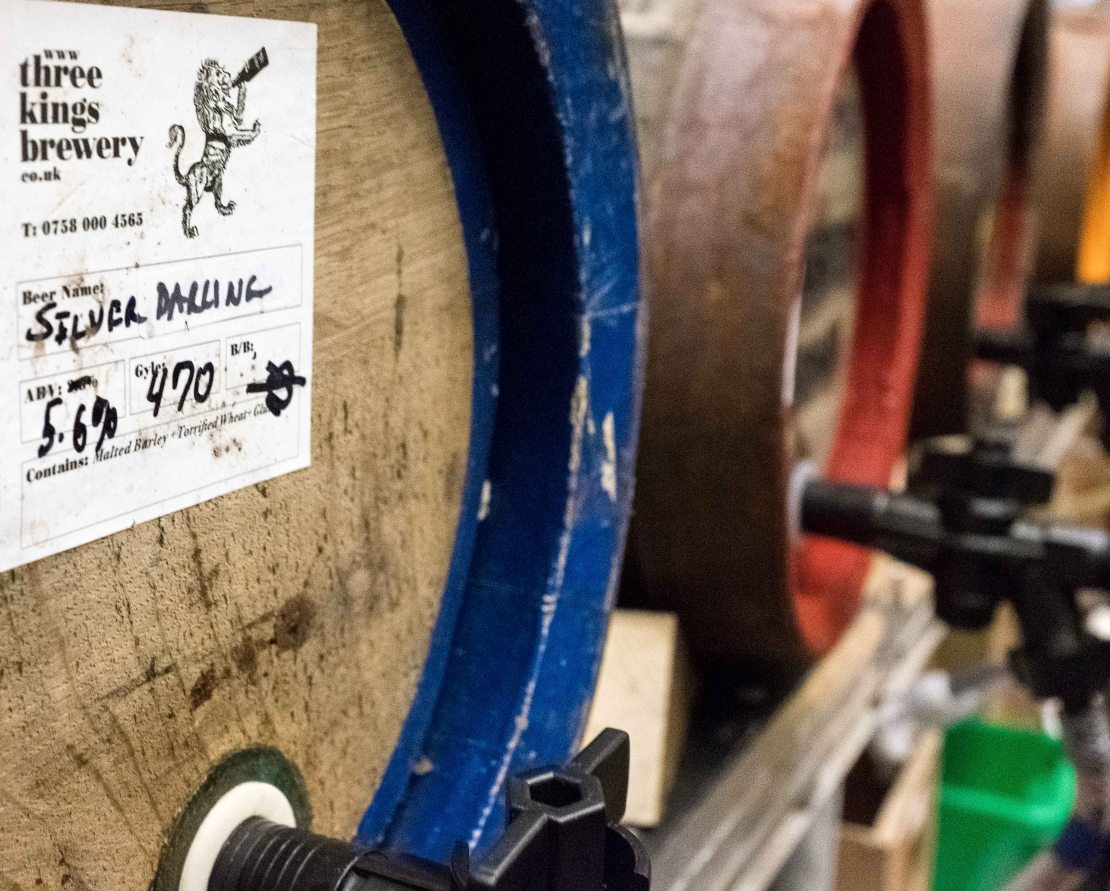 I said this last year, I really should have gone on the Thursday when the judging and the grand opening took place. The judges, who included Roger Protz, accorded Wylam’s Hickey The Rake as the Champion beer, followed by Three Kings True North and Yorkshire Brew Co. Mutiny. Fitting, I thought, that two local brewers took the top slots.

I tried all the winners, and if I’d been judging the Champion beer my Gold medal would would have been Wylam’s Jakehead. I guess that’s down to personal taste though and a blind tasting is very much different. It was however to my mind sublime. Although, Pleasure in the Darkness, a collaboration with Wylam and Hawkshead was sublimer. As I watched mine being pulled, I heard one bloke behind the bar say he thought it was crap. Well, if a very complex mix of sour cherry, a hint of whisky, subtle ground coffee and a soft chocolatey finish is crap, then crap’s good for me.

That wasn’t the only strange comment neither. One chap enquired of my Box Social Gentleman’s Nectar, saying, ‘What’s that? Is it alright mate?’ He couldn’t draw me though, I just told him my very hazy (murky) pale amber ale, and it’s little beads of oily resin on top, was delightful, with it’s sometimes piney, sometimes citrussy notes and it’s almost peppery, hop finish that leaves you wanting more and more.

Overall I couldn’t disagree with the judges choice of Hickey the Rake and highlight of the day was a tasting session between the champion beer in it’s keg, cask and cask through a tight head sparkler forms. 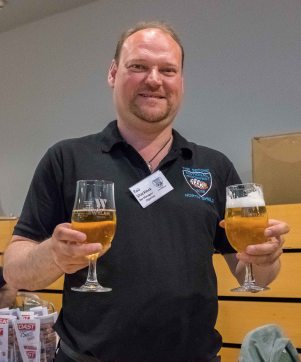 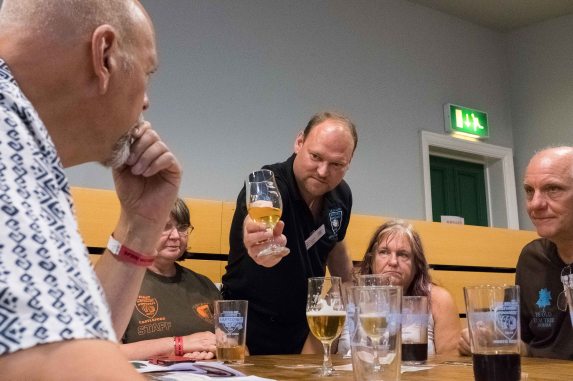 You might want to look at the photos here which clearly show the keg version that festival organiser and SPBW national chair, Rob Shacklock provided, was much lighter in colour (left one of the three), than the cask versions (tight head sparkler middle and gravity pour on the right). It’s surprising the effect the wood has on beers and Hickey the Rake is pale enough to demonstrate one of the effects.

As well as the colour, the taste is different. I find Hickey is quite lemon citrussy, nearly sharp, almost like lemon sherberts. Not the cask version though, the lemonyness is more rounded, mellow and any sharpness has gone. I reckon the effect of the wood has improved the beer and a drinker who might not like the keg version would approve of the cask version. Many would think they had probably tasted two different beers.

There were four of us, all reasonably accomplished beer tasters, who more or less agreed on this. A more definite concurrence was reached on the sparkled version. Everyone thought it was by far the best. Even Mrs C, who out and out prefers the texture and savour of a keg beer.

Why? Smoother, creamier in the mouth. Yes, there’s a subtle loss of depth in the overall taste, but the lemon citrus notes have been revived. It’s a bit like the wooden cask has taken the keg beer to one place and then the sparkler has brought it back, just not to the same place, a better one.

Rob tried it on other drinkers. The overwhelming outcome being they preferred the wooden cask version pulled through a tight head sparkler. I thank Rob for involving us in this which proves what a clever ambassador he is for that woody world where the coopers and the brewers art collide. He can also organise a very excellent festival too.

Leave a Reply to The Stafford Mudgie Cancel reply