I had high expectations of the sister pub to The Olde England, these vaporised the instant I saw that they only had six beers serving on the eleven hand pumps. Some folk might say that six beers are too many and eleven is just plain stupid. I say if you’ve got ’em flaunt ’em!

Wait a minute though The Black Prince is in the heart of the town centre and it’s Saturday afternoon and both of the towns sporting teams are at home. And everywhere else seems to have a full complement of ales on.

The thing that gave it away for me were the numbers of people in the open plan, two rooms either side of the horseshoe bar, pub. There were far more people in The Wig & Pen a similar sort of town pub we had left over two hours ago. No one said anything, but everyone ordered halves for the first time that day?

The pub is decorated in the same wacky way as The Olde England. The first thing you see as you walk in are two full sized Knights in armour, a theme supplemented by more stuffed animals and random collections of knick-knacks; blue and white pottery and small ceramic birds to name two. The far side of the bar carried a selection of hand pulled real ciders which is always nice to see.

The most outstanding feature was a contortionist on his day off, who stood at the bar tying his shoe laces, only thing being he raised his foot to his hand, rather than bending down. Impressive, I bet you can’t do that? 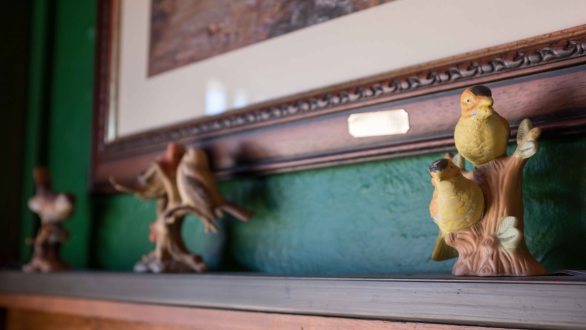 The beer was fine. I’ve got more than 3, but less than 3.5 NBSS in my little book. Myself and Mrs C tried Phipps IPA and Vale Brewery Gravitas, £2.92 for two halves, including CAMRA discount, but it hasn’t got them in GBG.

I popped outside to have a look in the large beer garden, it wasn’t full, but it explained where some of the customers were, and I couldn’t blame them. On the way back I called into the toilet. You instantly know something’s wrong when the first thing you see is a lady washing her hands. I apologised and continued in search of the gents. I didn’t know you could still get that sort of wallpaper? Obviously you can because the gents has a woodland theme going on.

The only other thing to say about this place is they have regular live music and comedy nights.

In summary, there was nothing really wrong with the pub, it just didn’t do it for me somehow.