My glasses instantly fogged up as soon as I walked out of the torrential rain into the bar.

All I could hear was a familiar sounding accent coming from behind a row of keg fonts that were strangely pointing towards me. I can’t have ended up behind the bar can I? I’ve only just walked in and I haven’t even had a drink yet.

‘You’d better sit down then and we’ll see about getting you a drink when you’ve sorted yourself out.’

To be fair, there weren’t many places to sit. I fancied a go on the comfortable looking leather Chesterfield, but it was taken so Mrs C guided me to the end of a long table that already had several groups around it.

The landlord came over. I say landlord because Dominic Kiziuk who runs the place with his fiancé Lena is a proper landlord, ex of The Sun Hotel, Lancaster Brewery’s flagship premises in Lancaster city centre, and he’s got the accent to prove it! 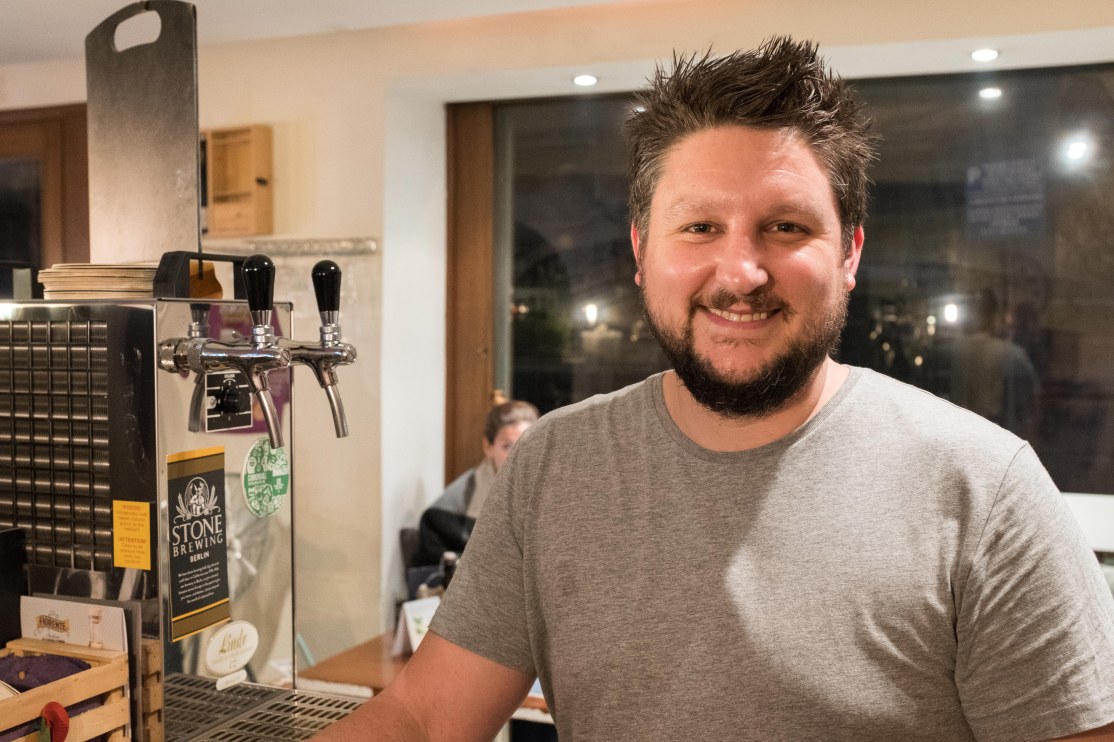 Dominic told me he opened the bar three years ago, in May 2015. His Mum had lived over here for a good few years, he fancied a change, his own business, and Malta just felt comfortable (which is as accurate an accolade as you can give). It had originally been called Il Kapitali before he changed it to 67 Kapitali, 67 being the number of the premises on Old Bakery Street

Every time I called by they seemed to be doing pretty well and were never less than 3/4 full at tea time mid-week. At the minute they are styled as an ‘Artisan Café and Craft Beer Bar’ but Dom was seriously thinking of dropping the ‘café’ bit, concentrating on the beer side of things, but still doing food.

The line up of draught beers was impressive, for Malta anyway. A line of eight fonts dispensing Lord Chambray beers and a portable keg dispenser sat next to them serving two draught beers from further afield. In this case Stone IPA and Magic Rock Cannonball. Dominic reckoned they were averaging around nine polykegs (20L) a week of draught Lord Chambray beers. It’s a bit hard to make comparisons with other places in Malta as they don’t have the same range of progressive draught beers. 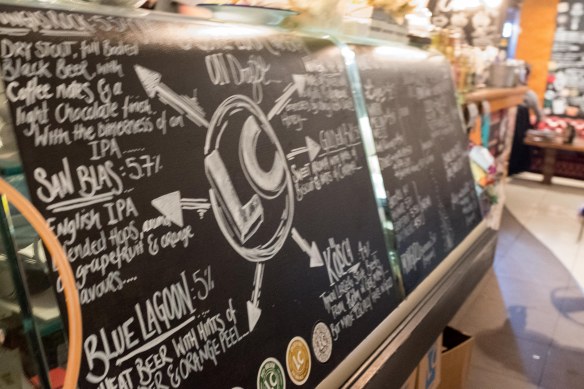 Tempting as the Cannonball was, I asked for Sans Blas which has to be my favourite Lord Chambray brew. ‘What do you mean you’ve run out?’

So, on our first visit we plumped for Lord Chambray Special Bitter and Blue Lagoon. The former being nothing really like a UK Bitter, but nice all the same and the latter being a very pleasant and moreish wheat beer.

67 Kapitali is well kitted out in a shabby chic, un-matched tables and chairs meets continental café, sort of style. It was nice, we liked it and we spent more than a few evenings in the place. The toilets, in a world where they might not always be brilliant, were clean and very pleasant.

The food looked very nice, mostly sandwich variants from local ingredients, which in Malta tend to be bistro style meals in their own right and a range of sharing platters. The A3 sized menus give suggested beer pairings and the Latte came with a natty horses head motif in the froth  – I’d love to be able to do that. 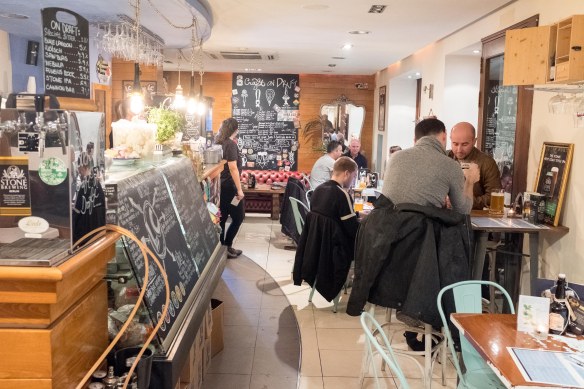 There were a lot of younger drinkers heading straight for the capacious bottle/can fridges and the very pleasant and knowledgeable waitresses were keen to assist in choosing from the many global brands.  A lot of the younger drinkers were going for the bottled beers, ringing the changes and trying things out.

Prices were par for the course for non-mainstream/craft beer (if you can get it) on the island, at €6.50 for a 50cl draught beer (€4.50 for 30l). On my second visit, my Yorkshire brain quickly worked out that the best value drink was Cannonball as it worked out cheaper a pint than it did in North Bar in Leeds. Thing was I couldn’t get Mrs C off the Blue lagoon whatever I tried.

The bottle prices varied from €4 – €6, depending on size and brand. There is a list on the  67 Kapitali web site, but there were a lot more different beers in the fridge than were on the beer menu, Mikeller and Magic Rock to name a couple.

I was keen to try the ‘in house’ IPA that Lord Chambray had brewed for Dominic, but I had to wait a couple of weeks until finally … ta da … the 67 IPA arrived: A Double IPA loaded with American & English hops which give it an amazing citrusy and floral nose.A beer which clocks in at 6.5% – 67 IBU! (their words not mine).

This isn’t a criticism; I didn’t get the aroma, it was too cold. Something which a lot of people would say about this style of beer and dispense. Me, I’m none too worried just let the hazy amber coloured beer sit on the table for five minutes, it soon warms up.

When it did, I got a soft maltiness, then bitter, slight astringency and a hoppy finish. Amongst other things I tasted citrus fruits (lemony orangey not grapefruity), a sprinkle of brown spices, a hint of linseed and a touch of sweetcorn, but I didn’t think it was detrimental nor a fault, in fact the opposite. In terms of the alcohol it was very balanced and didn’t feel like it was 6.5% at all.

Anyone expecting a DIPA like the current run of UK produced ones might be a little surprised. Commensurate with the other Lord Chambray products, it’s a southern mediterranean interpretation of what exists elsewhere, and I think that can only be a good thing.

Verdict; Serious range of draught beers that I’ve previously never seen in Malta. Best bottle fridge I’ve seen on the island too. All served up in a very nice bar by seriously nice people. Defo best bar in Valetta and vying for best bar on island status (just and only just  bettered by THIW in Sliema which is more of a VDE , but sadly without the impressive draught range).