If you fancy visiting The Corner, Mallinsons Huddersfield tap room, please don’t do what I did and walk repeatedly past J Dodd & Co. on Market Walk, gawping away like the village idiot at the map on my phone, which was insistent we were stood outside our destination. It was only the lad stood smoking by the back door of the health food shop who pointed us in the right direction, ‘If you’re looking for the pub, it’s up there mate.’ 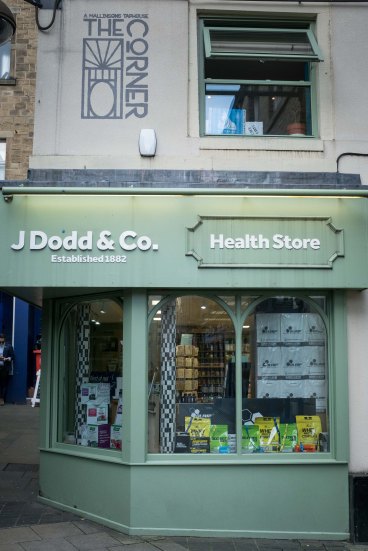 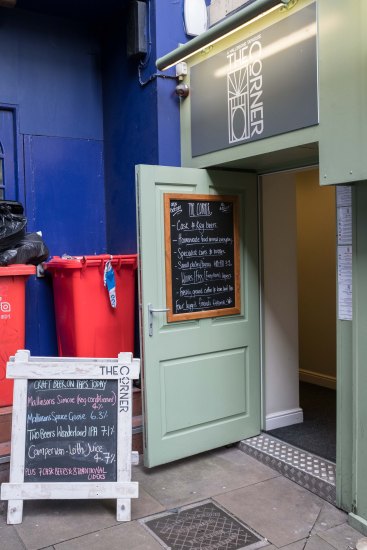 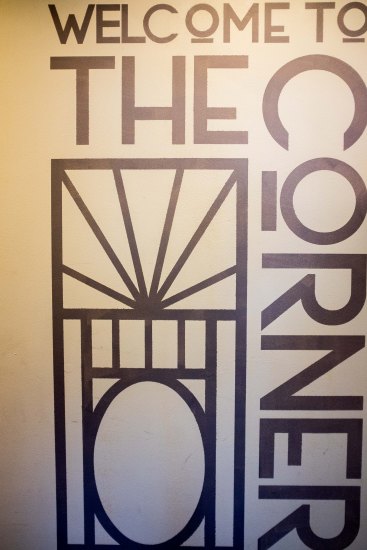 Turns out the, cunningly disguised in the same shade of sage green, back door to the health food shop is the entrance to The Corner which is upstairs. To be fair, If I had looked up there is a sign and I was lucky not to have tripped over the blackboard in the narrow alley way, probably because I was trying to keep as far away as I could from the dustbins in the corner.

As I walked up the stairs the crescendo of noise grew louder and louder. Wow, it sounds really busy, and it was, as well as the main bar on the first floor (second if you count in American), there was a wedding reception in full swing on the second floor. I never got round to ask any of the staff whether the second floor was just for functions, they were far too busy to engage in conversation.

When I say busy, it was a nice busy. Like, you couldn’t sit down at one of the many tables in the centre of the large square room unless someone left, but despite plenty of folk at the corner of the bar, you could still get served reasonably quickly. Bear in mind, it’s only just gone three o’clock on a Saturday afternoon. 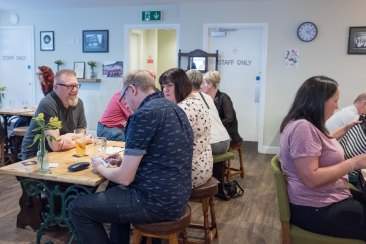 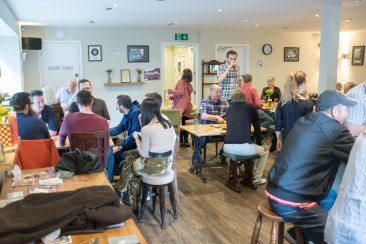 What impressed me was the diverse ages of the punters in what elsewhere would probably be perceived as a trendy bar. I’m not going to say pub, because to my mind a bar atop a health food shop isn’t strictly a pub, is it?

By crikey, it didn’t half feel like a pub though. Briefly the clientele included young men still in their work clothes, ditto older guys all crowded round the bar; smart thirty to fifty somethings with showy shopping bags; people who had eaten from the pleasant sounding lunch menu; groups of females, and a good few older folk, which was surprising as they are often intolerant of loud echoey spaces like this. In simple terms, a real cross section of the white-european sector of the Huddersfield community. No NTE drinkers or weakend (sic) revellers in here, just good proper, dare I say it? Select pub folk.

Noticeably there were quite a few ‘Last Of The Summer Wine’ types. Now please don’t think I’m being condescending here. I was born in the town and spent my formative years just down the road, along with a lot of other LOTSW types. Roy Clarke hit the nail bang on the head with his characters and oft’s the time as a young eighteen year old, I laughed with tears of laughter, and sadness, on a Sunday night at the comic antics, the signature music and the familiar countryside while I sat watching in my Scouse bed-sit.

‘Of course you may occupy the seats opposite,’ I told the old chap, who promptly demanded we move our shopping bag from the table top in front of him! I should have been a bit nicer, but the Betari concept kicked in and I told the grumpy old beggar to move it himself. This didn’t please his missus, who had pleasantly smiled at us when she placed said shopping bag on table and gone to the bar, while he trundled in after her with the males in their little group. Hopefully she hadn’t been buying any glasses or eggs earlier on? We kissed and made up, but she didn’t seem up for talking to him anymore after he’d dumped her bag on the floor, and between bouts of po faced solitude, she just chatted with her friend. You just couldn’t make it up.

What really impressed me was the majority, nearly everyone actually, of these folk were drinking real ale, and some really good kegged beers as well. I really like Mallinsons beers and I rated the Citra as, near as dammit, 4.5 NBSS. Between myself and Mrs C we sampled inter alia their US Mild, a sort of floral and slightly smoky taste, and the keg Simcoe which was awesome. These single hopped brews are, to me, the inverted signature beer of Mallinsons, if you get my drift.

The sign of a really good brewery tap is the inclusion of other brewers ales on the bar. As well as the Mallinsons ales there were cask offerings from North Riding Pale (over 4 on NBSS), Outstanding, Blue Bee and Hawkshead. Other brewers available on keg were from Outstanding, Two Beers, Pig n Porter, and Campervan. Prices were dirt cheap, only one cask beer above £3 (.10p) and the other six ranging from £2.50 to £2.90. The eight keg beers were more expensive at £3.40 up to £7.70 for a stronger (7%) IPA. There were two draught pilsners at £2.90 or £3.45. All prices are per pint.

I didn’t take much notice of the bottles and cans, why would you with a range of cask and keg ales as good as this? They had some though, along with a real, and local, draught cider.

Unlike a fellow blogger on one of his adventures, I wasn’t fooled by the reference to Sam Smith in the Good Beer Guide, or the absence of OBB on the bar. He knows I’m writing this, but I won’t embarrass him directly by naming him and will simply say that Sam Smith, formerly of The Sportsman is the lady in charge, and nothing to do with Sir Humphrey at all. 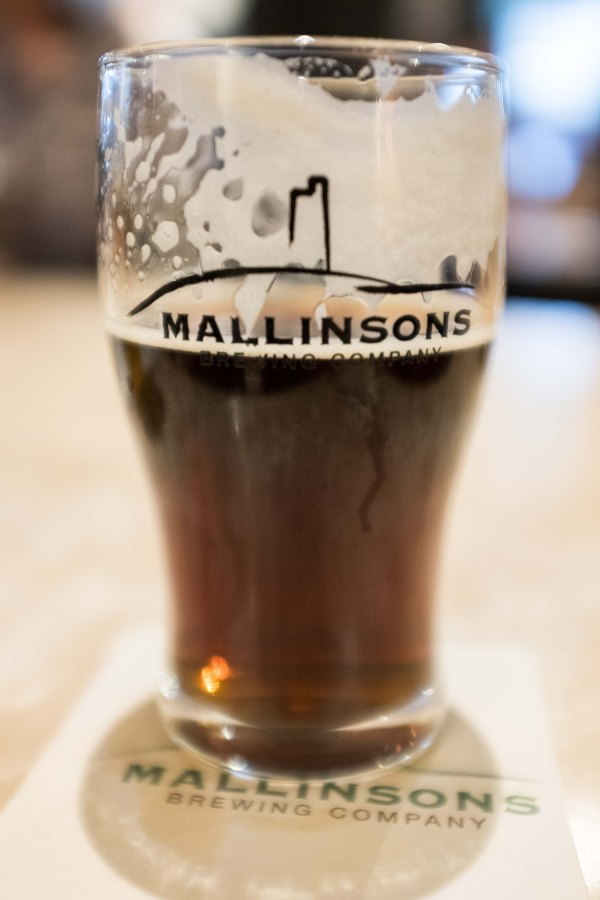 Okay, the beer is pretty much out of sight, but what about the rest of the place? Nice little fresh posies on every table, toilets were first class. The food was interesting, a short menu, but a clever and well thought out one, with each lunchtime dish only £5. Stick that in your pipe and smoke it Mr & Mrs Street Food Vendor!

I tried to put my finger on why I didn’t think it was a pub? It was full of good pub people, it had a proper bar, but? That’s it, no seats around the outside of the room, just tables, chairs, stools and buffets. In an instant I defined another, to me, important characteristic of a proper pub; built-in seating.

The question in my mind, if it’s not a pub, what is it exactly that makes a good place these days? They’ve got in spades here, and one key element is the buzz, it’s what attracts folk to a place, especially a new place, but The Corner’s been open twelve months or so now. Obviously you don’t need to be a pub anymore to be a pub! Things are moving forward. Is this a good thing? Yes and no, is the answer, I guess.