The building looks like it’s been transported from one of those new build, just outside town, on a roundabout, got a Premier Inn, Service Station and a Restaurant pub type of places. It’s just missing one of those garish plastic climbing frame and slides. 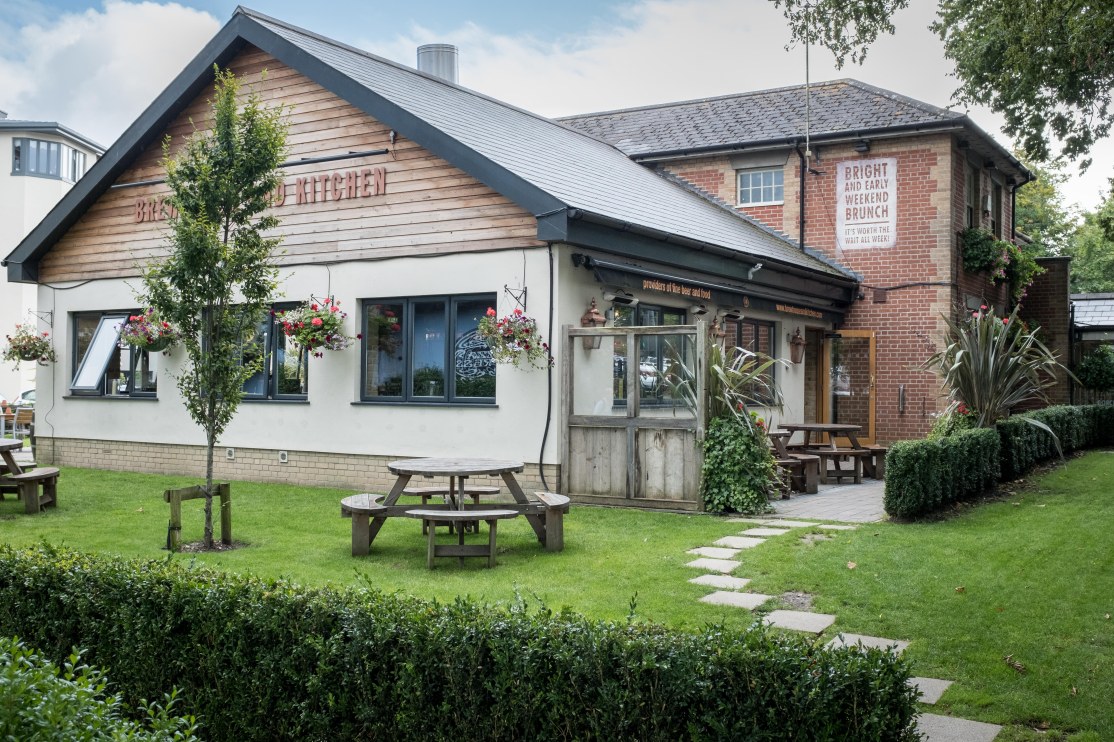 It’s not unpleasant, in fact it’s very well done and kept in shining order. There’s some interesting bits of decor, but to me it was sort of trying to be everything to everyone and instead of succeeding it all became a bit bland. It’s not the sort of place where you’d pop in for a quick one and end up staying all afternoon, I wouldn’t anyway. It was however very near to the station and bus terminus. Oh look, they’ve even got Brewhouse and Kitchen TV!

It’s quite a big pub and I counted six customers, not including ourselves and it’s now 4.00pm on a Thursday. One of the people I encountered was a guy called Karl Bingham, who’s the brewer at the Dorchester branch of B & K. There’s seventeen of them, mostly in the South and West of England, but they’ve even got two in Cheshire. Karl said they are opening a branch in Cardiff next year, and he’d heard, Leeds in 2019.

Now I’ve been in a few pubs with ‘Brewhouse’, or similar, in the title, only to find that they are lying. In this case though, there really is a microbrewery; 4BBL or 600L which consists of a hot liquor tank, mash tun, copper and four fermenters, all pretty simple and nothing fancy.

Karl, a keen home brewer and local bloke was a toxicologist who decided on a career change and pursue his love of brewing. After embarking on a Brewlab course, in Sunderland, he’s been the brewer here for just over six months now.

They also had Beaverton Gamma Ray, Wild Beer Pogo, Goose Island IPA, Big Hug Hibernation, Whitstable Bay Stout, Weihenstephaner Hefe Weissbier, Innis & Gunn Original and Tongerlo Blond on draught, prices varying, but rising to near six quid a pint for the Belgian one. There were plenty of bottles, but nothing esoteric of the sort which would have the DIPA geeks queuing up outside bottle shops two weeks before it came out!

If you wanted a Pilsner type beer, you were equally well met; D’Orangeboom Orangeboom, Asahi Super Dry, Sam Adams Boston Lager, and Krombacher Hell, all on draught, ranging from £3.65 to £4.95 a pint, in the order I’ve listed them, plus bottles.

You’re probably thinking he did well writing them down, he’s been out since dinner time and done four other boozers already. I didn’t write anything down and I’ve relied on the well produced and corporately designed in-house Drinkers list. The amount of branded B & K ephemera is impressive. Collectors of this sort of stuff could fill their boots, take it home, put it in a box and … what do they actually do with it all? 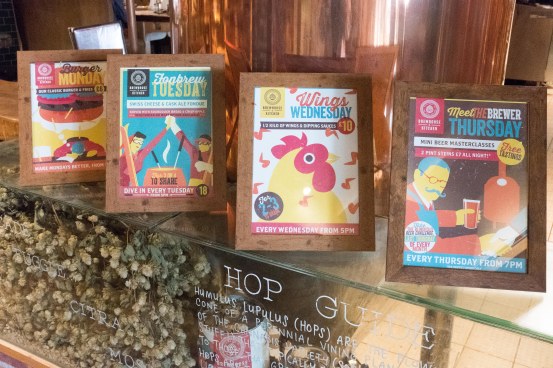 The amount of promotions were unbelievable; Beer Masterclass – 8 beer tutored tasting sessions for £20, Brewery Experience Day – Brew with our head brewer £85. Fair play, you get breakfast and lunch, it’s all day, with sampling, and you take home a 5 litre mini keg, or come back two weeks later and collect one of the ale you brewed. I thought that sounded like a decent do for a milestone birthday present or something like that. There were other promotions, many food orientated ones, including ‘Meet The Brewer Thursday’ (evening), which explained Karl’s obvious presence.

The first beer I had was a Cerne Abbas Giant, the in-house beer list said citrussy (yes), piney (yes) but missed out it’s pleasant soft malty backbone. I did wonder whether the Puritan 6 was the same (or very similar) beer, kegged instead of cask? I should have tried some.

Karl said the Cerne Abbas was their best seller, I can see why. It was a decent drop and I enjoyed it. I should have stayed on it, there was still plenty of time before the bus came. But No! I had to try something else.

Nine Stones wasn’t a bad beer, it was on top form and there was nothing wrong with it. It just lacked … ? No body, no bite, no taste, just a very clean taste and that was it. Thankfully I’d only ordered a half. I should have had a taster, they did offer. Anyway I went back on the cask American IPA and continued to enjoy it whilst I listened to the touring couple who had arrived in Dorchester sans reservation and were frantically trying to secure a room for the night and keep their marriage together at the same time; ‘shut up will you, I’m on the phone!’

Thankfully they managed to get accommodated and turned to their nutritional requirements. I thought the menu sounded decent and reasonable. The guys I met in Bridport had warned me to stay away from the food, reckoning it was too dear? The card said modern pub fare in a Mexican, BBQ, Beer butt Chicken sort of mixed in with traditional standards sort of way. At the prices stipulated I could have easily eaten there. The various offers, which were advertised at every verse end, and nook and cranny (did I mention that?) promised even better value, dependant on the day of the week.

Just as it seemed, however hard anyone was trying, that there was no chance of even a glimmer of hope of meeting more than a small handful of other punters in Dorchester, they started rolling in. Maybe half past four in Dorchester is the watershed for pub trade. And No. They weren’t just families out eating. Groups of adults, dressed up, who looked like they were out for the duration. Couples meeting after work. Even an adult Birthday party. The only thing that was missing was grumpy old blokes sat in corners mumbling to their newspapers.

In the space of three quarters of an hour the pub was nearly half full and there was a real buzz, sadly the bus was due at 1820 and we had to leave. Why do I always choose to go drinking at the wrong times?

A. Because I wasn’t risking the last bus back to Bridport at 2015!

Verdict: If Brewdog collaborated with Harvester then the result would be something like the Brewhouse and Kitchen, Dorchester.