1545hrs, Wednesday 27th July, Filey Cobble landing bar, more bar and bistro. Two hand pulls on, one with no clip and the other saying Doom Bar but with a pint glass balanced over the handle.

Pointing to the upturned glass, I said to the guy behind the bar, ‘Presumably that means there’s none on?’

If I’m honest, I was glad. So, it was a pint and a half of Grolsch £5.15. Polycarbonate glasses too, in case you throw them off the balcony. Barman said they had been busy at lunch time, and they had some big tables booked for tonight. Best balcony on the east coast, sun nearly out, promenade busy, loads of ice creams, tea and coffee and Donuts (sic). Nice enough inside, not a pub anymore, was a bar with atmosphere once, now it’s £21.95 for a giant garlic bread, 2 large pizzas, 2 Carling or Caffreys and 2 large glasses of pop. Happy Families! 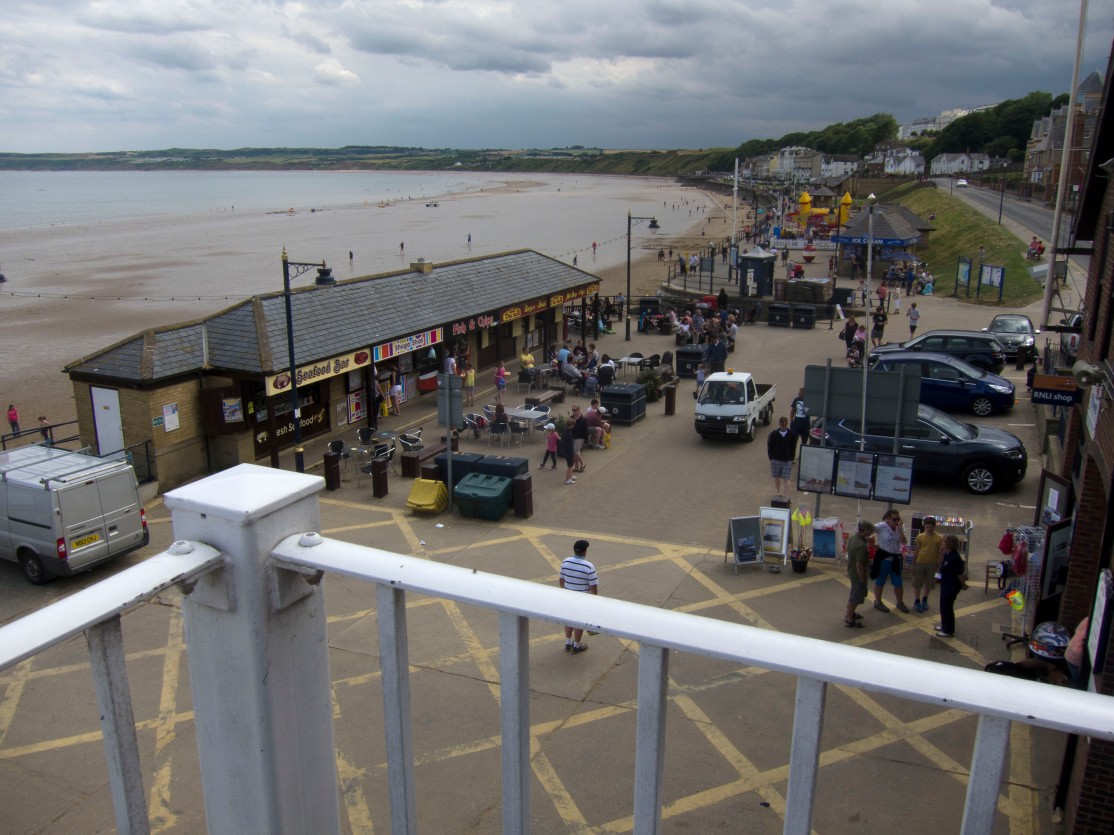 There’s only one seafood stall on the cobble landing now, when once there were two or three, sign of the times, people don’t want cockles, mussels and whelks or crabs, they want Shuga Shack donuts, Fish and Chips or the Tea Bar (2 stalls in one) burgers drinks hot dogs chips, no wonder folk are the size they are these days, long walk to Filey Brig required, me thinks. Maybe it’s the same with beer and pubs?

I’m now thinking, I’m not sure whether Filey will get any better in terms of beer, maybe not from past experience, most day trippers drive back to the industrial heartlands at tea time or go back to caravan sites for tea and TV. I’ve always found that Filey’s more a place for local folk at night?

I was surprised I’d never been in Bonhommes bar before because it’s been here for years according to one local. He said it was the American Bar for a long time. He remembered it when he was a teenager and he was well into his late 40’s.

Dogs and kids welcome, but not teething infants! I felt sorry for the little chap but the people were a decent family and they they dosed him up with Calpol before one of them took him off for a walk in the pram, why can’t all parents be like that?

Split level one room bar with original high ceilings, hand full of locals and a smattering of visitors and decent piped music. In terms of decor, it seemed to borrow a little from each era of the late 70’s, 80’s and early 90’s music they were playing. Four hand pumps on the bar, but only three with beer on, maybe a Tuesday early week thing? I get that. There was also  selection of everything else you would expect to see. 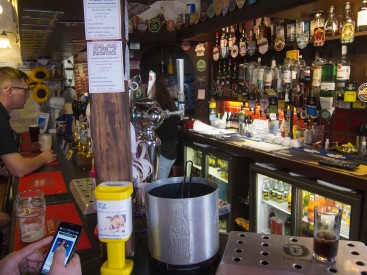 The Crossbay Brewery Zenith (5%) was spot on to the end, at my second visit to the bar it ran off! The manager/cellar man expressed his surprise at how quickly it had gone. Mind you at £3.75 for a pint and a half I’m not surprised. I tried a Sandiway Ales Hop Schism (4.1%) next. The bloke said he’d tried some from the barrel earlier and he thought it was decent. How many pubs have this sort of QC? Not many I reckon these days. Often there isn’t even anyone to change the barrel.

The Hop schism wasn’t, to my taste, just quite as nice as Zenith, but similarly on very excellent form and nice to see some North Western ales on the bar for a change in deepest Yorkshire. I noticed a Titanic brew was on next and they had a mild on.

There’s no wonder Bonhommes bar has been the local CAMRA Rural pub of the year for 2008, 2009 & 2010 and Runner-up for 2011 – 2014. I’m none too sure about the rural part of the accolade as the pub is in the middle of the town centre? Maybe Scarborough CAMRA hold the belief that anywhere ‘not in Scarborough’ is rural, end of. You know, a bit like Liverpool’s ‘Woolyback’ thing.

The pub was very well kept and exceptionally clean and well maintained. Dog bowl and a smokers umbrella, quiz nights, live music and food between specified times. Wi-fi available and toilets are nice, there’s even dual child seats and nappy sacks and stuff in the ladies. Which begets the kids in pubs argument that I have been avidly reading on other blogs. My two penn’orth on this is, if you can’t have well behaved kids in seaside pubs then you might just be signing the pubs winding up notice.

It looks like the place has once been the public bar of a larger establishment, because the front of the magnificent building looks out over the bay, like it once was a big hotel? It appears to be all apartments now, but perhaps someone who’s genned up on Filey history can let me know? The only downside is that it’s side street location means you might miss it if you didn’t know it was there, if you see what I mean.

I really liked Bonhommes bar, it felt right and it was right. Very good beer, very friendly locals and staff.

For those who are interested, the Bonhomme Richard was a warship of the American Continental Navy which sank in the nearby  Battle of Flamborough Head on 23rd September 1779. Presumably there is a subtle link here with the bars previous name? Quite why the American Revolutionary Navy sailed half way round the world is anyones guess. If there are any scholars of American naval history then please add something in the comments