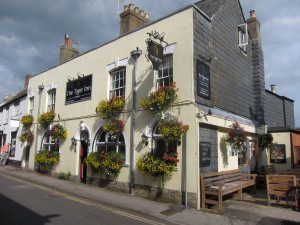 A shining star, in a Palmers night.

Doom Bar being the only …?

I couldn’t think of a non vulgar, rhyming ending, but if you want a choice of a decent, non Palmers, pint in Bridport then this is the place to head for. Tucked away on Barack Street, just off the main thoroughfare, The Tiger is a wonderful little pub. Besides the ale there is Sky Sports, two neat, semi covered courtyard areas, a Skittle alley, Darts, no food and a good local craic. I like the no food bit, bucking the local trend, refusing the allure of Brakes refrigerated lorry. The bogs are decent too. 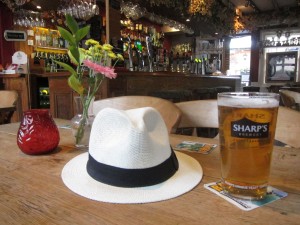 Bare board floors in the main bar are covered with a right old mish mash of old kitchen tables with unmatched, traditional style chairs and benches and a simple posy of flowers on each table. Hop garlands decorate the bar top and the exposed original beams. At the back of the pub there’s a second bar which seems to be used more at times of important sporting activity on TV.

Smokers are properly catered for with the two courtyards. The interior one is totally contained within the pub and almost fully covered with a large professional canopy and although I’m not sure about the ethics of trying to make the outside as warm as the inside; there are on demand heaters. The outer yard serves as the main entrance and has stout bespoke wooden seating under large sun shades.

Over two weeks I saw and tried: Oakham (Tranquility & JHB), Gyle 59 (three), Piddle (at least four), Liberation ale, Exeter Rifleman, Timothy Taylors Landlord, Sharps Atlantic (as well as the ubiquitous DB), Butcombe (several), Fullers (two), Thornbridge Jaipur, Yeovil ales. There’s a real commitment to local brewers across the South West, you can see that from the pump clips adorning every bit of exposed beam. Someone involved knows what’s happening elsewhere and they’re cherry picking some notable brews from further afield, as well as looking after the more conservative taste. Everything I had in The Tiger was on top form. It had to be because most barrels didn’t last long and if you tasted something good you had to enjoy it because it wouldn’t be on the next day. Prices were dearer than I expected for a rural market town where the locals complained about the lack of proper jobs and low pay. A pint of London pride or Sharps Atlantic was £3.20, rising through £3.40 for Butcombe Moxee and £4 for a Jaipur, which is on par with Leeds city centre 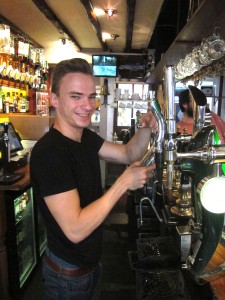 I’ve got to mention Gyle 59, for me they’re cutting edge and locally based in Chard. I tried three of their ales. The IPA was a quality drink, a modern style IPA with a decent hop hit, but well balanced. The Toujours Farmhouse Saison was also good. I even liked the Ginger IPA and I don’t usually favour these ‘novelty’ beers. I was really impressed with all three. This brewery is one to watch and needs sampling if you see it on the bar.

Cider appeared to be the favourite tipple of most locals, I get that sort of tradition down here. I can understand it even more when all you can get in most places is Palmers. The Tiger has three draught ciders and two boxes of more local stuff. Thatchers appeared to get the locals vote.
Market Wednesday is a good day to visit, although the market isn’t produce based anymore, there’s a real market town feel, a good few in the bar during the afternoon and always someone willing to chat, even if it’s just the friendly staff, like Cameron; I told this budding young actor I’d give him a mention.

This is the sort of pub that would be appreciated by lots of people from all different walks of life, drinkers and pubby people, people who like a nice variety of decent beer kept in good form, all topped up with friendly company.